If you want to set your brand apart from the competition, one of the best ways to do it is with superior customer service. Go the extra mile and help your customers. More importantly though, don’t take advantage of your customers. If you do, you will lose their trust, and they will not want to do business with you. A perfect example of a company that doesn’t care for their customers is Sprint. Just look up “I Hate Sprint” or “Sprint Sucks” and you’ll see what I’m talking about.

On Saturday, October 27, I went into the Sprint store in Brighton, MI to get my Samsung Galaxy S2 fixed. After all, I have been paying for insurance on the phone, so there shouldn’t have been an issue. Unfortunately, there was, and this is my experience of poor support and customer service by Sprint.

Over the past two weeks, I’ve been dealing with instances where my phone has been shutting off randomly. Sometimes it’s been while the phone isn’t in use, and other times, it’s been while I’ve been using the phone. The interesting thing is that the phone instantly claims it has zero battery life, while it’s normally at a level higher than 50% when it dies. I literally cannot use my phone at all until I have plugged it into a charger, and when this happens, the battery level instantly jumps back up to where it was when it died.

I did some research online to see if maybe an app I installed caused the issue, but instead found it could be from a swollen battery. I opened up my phone, and sure enough, the battery is bloated.

So, when I went into the Sprint store, I explained my issue and the employee said that I wasn’t the first to have this issue. He said Sprint had sent an over-the-air update, and that it caused the batteries to be affected and become bloated. He said since this was an issue caused by Sprint, it should be covered, but I would have to go to the other store in Brighton, as it was the authorized repair facility.

I went to the other store, brought in the phone and battery, and instantly, they agreed it was swollen, and again confirmed it was an issue caused by Sprint’s OTA update.

Here’s where everything gets messy. I was asked for my phone number and they looked up my information. I have had my phone for a year and a couple weeks. Apparently, because I’ve had my phone for more than a year, it no longer has a warranty. Because of this, the battery is not covered by the warranty, even though the issue was caused by Sprint. 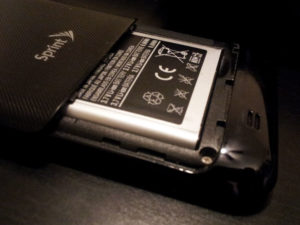 I was told I could purchase a battery for $35, instead of the standard $50. I asked about the insurance I have, and apparently, all it does is give me discounted rates if the phone or a part needs to be replaced. Really, it means that Sprint can destroy your phone without any consequences and then charge you to have it fixed. Ever wonder why phones seem to break near the end of their contract? I told them I wasn’t going to pay Sprint for that and would purchase my battery online. Currently, I’m dealing with a broken phone while I wait for it to be shipped.

Honestly, this has nothing to do with the $35. This is about treating your customers right and not stealing from them. If you want to be a good company, it’s about trust. Sprint cannot be trusted. Don’t use Sprint because they care about you or anything besides the almighty dollar. And if they do lose customers, it doesn’t matter because it’s “by design” as CEO Dan Hesse says.

(Edit: Sprint did the right thing and corrected their error.)