Two days ago, Google finished their celebration of Sesame Street’s 40th Anniversary. I remember after seeing them, I was wishing that there was a way to download them. Like a majority of the population, I watched Sesame Street when I was younger, and seeing those images reminded me of childhood.

Well, while I was looking online yesterday, I found out that (Edit: Google no longer offers the images for download, but you can purchase them from their Google Doodle Store.) as “high-resolution” images. To clarify the “high-resolution” word, it’s 1200×800 and not vectore, which means low-resolution to anyone who designs with print.

Now, these next few were additional images available for download which I never saw until yesterday. The behind the scenes image is just cool. I never realized how global Sesame Street was. Also, I have never even heard of these characters. I don’t know if they were only in the international shows or if more have been added since I stopped watching many years ago.

Sesame Street Ensemble Behind The Scenes 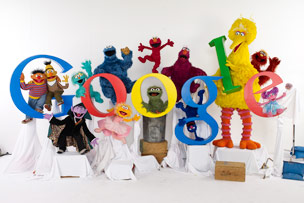 Isn’t it amazing what kind of design inspiration we can get from Google just about every day? All you have to do it go to the home page and see what the image is. That would actually be a fun job, to just design the latest Google banner for the day.

Additionally, this may be a bit off-topic, but I realized that Google used a jpeg for the final day, but used gifs for the first six images. I guess it just shows that Google knows something about optimization.